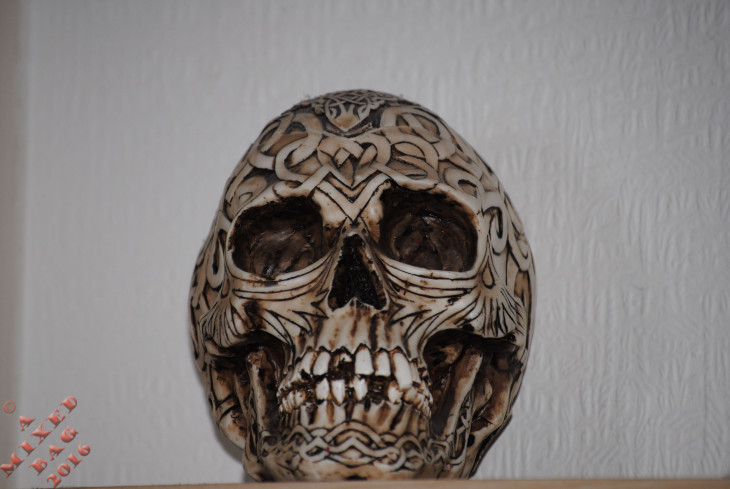 Jeffus took me and Petey-pie down the kitchen stairs into a basement that smelled like wet cardboard.  Petey-pie was acting smartass like he does when he gets nervous.

“You ain’t gonna show us your dick room, are you Jeffus?” he said. “Your Temple of Terrible Porns?”

“Fuck you, PP,” said Jeffus. “You don’t want to see this shit, go home to your drunk mommy.”

Jeffus flicked on a light.  The room looked like it hadn’t even been stepped in since the 70s. Gold carpet, warped wood paneling, a beat-up tiki bar in the corner. Petey-pie went over and picked up a bottle, popped the cap and swigged it.  “Cat piss! Or, as it’s commonly known, Cutty Sark.”

He tried to hand me the bottle, but I was watching Jeffus unlock a metal cabinet in the corner. He got it open and flung the door wide. He bent to grab something, turned around and held out a Jap flag, waving it in front of him like a matador.

Jeffus nodded. “Pops was on Okinawa. One time he got drunk and told me how he killed a Jap come into his foxhole by sticking his finger into his eye until he poked his brains out.”

“Oh yeah, smartass? How do you explain this?” He reached to the high shelf and took out the skull.

Jeffus nodded. “Pops cut the Jap’s head off with a Kabar. Then he paid a cook to boil off the flesh. He carved the scrollwork on the ship home.” Jeffus held it out at arm’s length like the guy in the play. “His most valuable possession.”

2 thoughts on “Pops Was a Maniac”