Man my age is lucky to have a grandma at all, at least a living one. We were never all that close, since mostly what she did in my life was express disappointment. 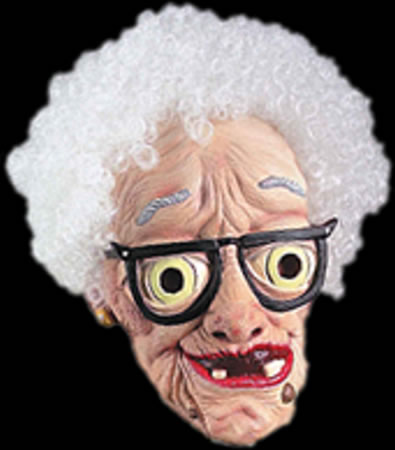 This is just a mask. But it does look like my grandma

But she did teach me there was a difference between cheap booze and the good stuff (she favors Cutty Sark, which may be considered good but still tastes like a sock) and she said that if I have to lie try at least to lie well. I don’t know her background, but I think her daddy was some kind of criminal. I feel crimes in my blood, if you know what I mean.

Anyway. last time I was in County I remembered that it was her birthday. I decided to call her. Now, those of you who haven’t been inside probably don’y know about prison phones. They suck and they’re expensive and you have to use them. The main company is Pay-Tel. Look em up. If you’re a guy like me, you have had an account for so long that they should send you a Christmas card.

So I put in a request and am granted access. 3.55 for 15 minutes. It’s way more if it’s collect, and usually it is because putting money in your Pay-Tel account before doing a crime might be seen as unlucky.

Anyways, I call up grandma to wish her happy day. She doesn’t have her hearing aid in at first, and then she turns it up way to loud so it feeds back like a Hendrix solo. All this preliminary takes up half our time and we haven’t even spoken yet.

Finally I am able to identify myself and I say happy birthday. She says “Randall, where’s my song?” When I was a kid I used to have to sing to her, and she still remembered. I usually do every year I remember her birthday, but usually I’m not in the joint.

So I look around. The room is almost empty, so I sing the birthday song real quiet.

She says that’s it’s nice. We have about two minutes left by now. She asks me what I’ve been up to, so I tell her.

And then she says the best thing ever.

“So, up to your shenanigans again, are you, Randall?”

Her daddy must have done crimes. Only the daughter of a criminal would call being in jail “up to your shenanigans again.”